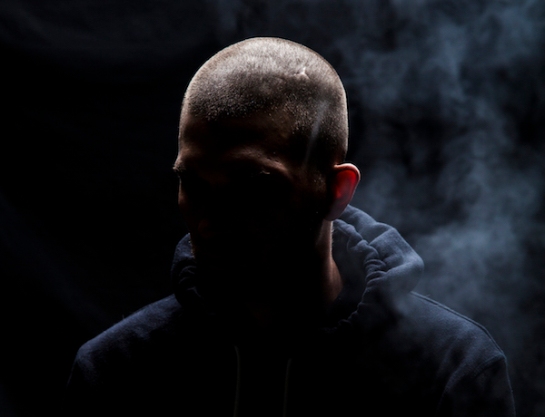 It’s another blistering day as Letta and I sit outside the Arts District warehouse he’s currently staying at. Los Angeles’ famed beat scene is the topic of conversation, or, more accurately, the lack of recent innovation in Los Angeles’ beat scene. “I can’t fuck with anymore 404 drum machines or those god damn jazzy seventh chords that sound like Nintendo. How long can you do that?” Hailing from the Northwest, Tony Nicoletta has followed a roundabout path to his current location, a path rife with internal struggle, addiction and violence. Letta is also sick of the deluge of kids following outfits like Team Supreme and Soulection. “If I were that positive I would be married and be a real estate agent and have a huge house. All this shit that makes LA seem so laid back and peaceful gets to me.”

With his debut Testimony LP out on October 9, Letta has a lot on his mind and while LA’s hoards of teenage trap DJs are a drag, the album’s background soon takes over the conversation. “I did the hip hop thing for a really long time. Always slower than the boom bap-y stuff, more on a Portishead tip. I was always making shit at 65-70 BPM. I just sampled shit for years.” The conversation takes a detour to the tragic passing of legendary Brownsville rapper Sean P, one of Letta’s favorite MCs and an immensely relatable figure. Nonetheless, Nicoletta later laments that “words are dead” and, at least for now, he’s working almost entirely with the instrumental format, blending the occasional sample into the mix but largely letting his pensive, harmonically thorough productions shine on their own.

Letta first came across grime in the early 2000s, initially attracted by the sparse arrangements and dark minimalism of Wiley, Ruff Sqwad and Tinchy Strider. The MCs reminded him of East Coast rap’s rougher streak, the cold, no-fucks-given attitude that would also attract him to Portishead and Gang of Four. In fact, Letta’s dad was in several Seattle and Bellingham-based synth pop bands, an uneven (but unsurprising) musical lineage that included the passing down of an Ensoniq ESQ-1. Years later, after a long stint in a methadone clinic, Letta would utilize a Casio-101 to begin to realize the sound found throughout Testimony, a cavernous blend of twisting, heart-wrenching synth lines and punchy drum programming loosely based in classic grime, but more akin to the style pumped out by other Coyote artists like Spokes and Last Japan, as well as much of Mr. Mitch’s Gobstopper roster.

Hit the jump to read the full Letta feature interview…

Sitting upstairs at his makeshift studio, Letta explains the importance of Mr. Mitch’s work, citing “The Lion, The Bitch and The Bordeaux” and its family video-style visual accompaniment as being a vital influence in the making of Testimony. Listening to Mr. Mitch and other likeminded artists allowed Letta to make the connection between the “stripped down to almost nothing” tracks he grew up listening to and the melodic, R&B-referencing sound he was working with at the time and continues to champion. “To call it grime even seems pretty inaccurate at this point. Clearly there are these huge references, but even in tempo it varies.” Like many other producers from outside the M25, Letta approaches grime in an indirect fashion, taking more influence from its Spartan makeup and anti-authority attitude than from its greyscale nature or uproarious hook work.

The reintegration of reflection into Letta’s life and music didn’t happen immediately and his journey to Los Angeles has included quite a few pit stops After years spent in the grip of heroin addiction, a time he describes as essentially “numb”, Nicoletta began to kick the drug which eventually led to the aforementioned stint in a Seattle methadone clinic and, later, self-imposed isolation in the Arizona desert to wean himself off of methadone, a drug often more difficult to kick than heroin. As Nicoletta began to reacquaint himself with his former life and life outside of drug addiction in general, he began to listen to music he hadn’t allowed himself to listen to in years, artists like Elliot Smith and Kate Bush that recalled a former life. “I tried to listen to these songs to recreate the memories I had and it worked.”

“No one’s doing this to become fucking rich.” The conversation swings back to what we broadly consider instrumental grime, particularly the “weightless” sound championed by Mumdance and Logos and their Different Circles outlet. Songs “so literal in their grime references” that still are completely outside of the realm of the MC-led culture. FKA Twigs’ “Water Me” was also a huge influence at the time while you’ll find Nicoletta listening to more Drake and Dej Loaf these days. His parlance might be instrumental music, but like Rabit, Strict Face and others working on the fringes of this wave, threads of contemporary R&B and other vocal work can be found just below the surface.

Testimony isn’t a record that hides its intent below the surface, each individual track recalling a time and place from Nicoletta’s childhood. Kicking it and talking about Air Maxes with a lost love in West Seattle, family in Bellingham and a special bond with a methadone clinic worker named Jesus who passed away in a car crash. The pain and longing inherent in each and every one of those events can be found on tracks like “North Face” and “Where I Left You”, songs that sound sorrowful until you realize that they’ve come from a place of reflection and recognition. It’s a stubborn record with all of the trappings of bulldog East Coast hip hop, but realistically, there’s more Elliot Smith here than Sean P. Nicoletta has an upcoming trip to London planned as has begun to play out more, another testing for an immensely personal record. And while Los Angeles might not adapt to the work of Letta and the likeminded artists he dialogues with, it’s clear that there’s an audience for Testimony somewhere. “If I have weed and my gear and my cat and a place to live I’m fine. I don’t know what I’d do with a bunch of money. Buy an Audi? If I make some money, I’m just going to buy a house in Joshua Tree and just get off the grid.”

Testimony is out October 9 and can be pre-ordered here.