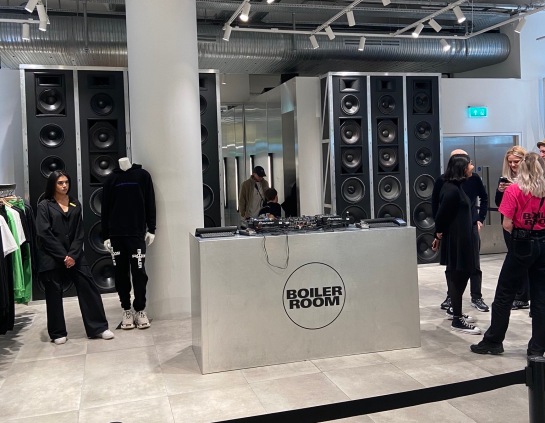 “The concept of progress must be grounded in the idea of catastrophe. That things are ‘status quo’ is the catastrophe.” – Walter Benjamin, The Arcades Project

Look out over any large city’s skyline and a homogeneous certainty is made clear. Mies van der Rohe skyscrapers or knockoffs are omnipresent, fighting for urban space with Norman Foster’s oddly shaped, reflective totems to multinational capital. IKEA’s denuded take on mid-century modern furniture is the de facto interior decor for the young professional set, while the clean line and muted color-driven design of the Swedish furniture conglomerate is ubiquitous in chain restaurants, web design, and everything in between.

The promethean, utopian modernism of the 20th century has largely atrophied under 40+ years of neoliberal order, now resigned to art books and heritage sites. Aptly laid out by architecture and culture critic Owen Hatherley, modernism is now defined by the “distance between itself and the everyday.” Hatherley’s Militant Modernism and Landscapes of Communism, published in 2009 and 2015 respectively, function as earnest and honest investigations into the makeup of the modernisms of the last century. Probing the architecture, literature, film, theater and politics of the early revolutionary Soviet Union, industrial England, Weimar Germany and more, both volumes salvage kernels of wisdom from past forms.

An earlier volume, Marshall Berman’s All That Is Solid Melts Into Air, published in 1982, performs a similar task, delving into modernism’s genesis moments (Goethe, Baudelaire, the construction of St. Petersburg) to draw out the contradictions and failures of uneven development in Russia, mid-twentieth century New York, and a burgeoning austerity state under Reagan. Berman understands modernity as a “maelstrom of perpetual disintegrations and renewal,” and that only through communication, dialogue, and dialectical thinking can the dream where “the free development of each is the condition of the free development of all” become reality.

Following the rise of multinational capital and its ensuant postmodern cultural logic, Hatherley and Berman’s tracts are important reminders of what was once possible: an art that didn’t dispense with the everyday, politics in the street, and a vision for a world after capitalism. Many of the modernisms called on by both — Brechtian theory, early Russian constructivist architecture, Marx’s “free development of physical and spiritual energies” — still feel eminently alive today and are worth excavating for their relevance to contemporary life, as well as  studying in their own right. That said, modernism’s vitality comes from its relationship to the present, to humanity’s “capacity for perpetual self-critique and self-renewal” and through a willingness to “wake up out of this dream, with its proliferation of phantasmagorical commodities, into an entirely new world.”

Electronic music, being a far more recent cultural development than the artforms mentioned above, has a shorter and more fraught arc through modernity. Depending on your vantage, electronic music’s modern period either started or ended with the rise of house music and techno in the 1980s, came to a halt in the mid 2000s with the petering out of UK hardcore continuum sounds, or is going strong into the 2020s. It is also a form tied inextricably to the technological developments of the last fifty years — the Internet, cheap hardware, software, increased accessibility of air travel — positioning it as a key driver and participant in the shaping of a rapidly changing cultural landscape.

Even when considering its broadscale tie in with technological ubiquity, it’s easier to pinpoint localized moments or passages of modernist energies — Chicago’s confluence of dancefloor movement from house to footwork, gqom rapidly transmitted over Bluetooth and shoddy file sharing technology in Durban, jungle’s proliferation via pirate radio in London — than it is to connect it to wider, trans-continental sonic movements. Despite this haphazard developmental pattern, the rhythmic and structural progress made over the past several decades has resulted in a staggering compendium of sonic vernaculars.

In spite of this conflagration of modernist energies, a certain pop or calcified modernism- more akin to a coffee table book rendition of an early 20th century futurist movement than the movement itself- is dominant in dance music today. Centered in a handful of prohibitively expensive cities, dance music’s currency is all too often invested in retro consumerism, nostalgia and pastiche, while a consensus-making ethos that emphasizes tastefulness over all else reigns supreme. The constant cycle of genre trends, undergirded by a rotten center of commercial house and techno, is the most illustrative component of this malaise: a virtual carousel of the most dehydrated qualities of once radical music from 10, 20 or 30 years ago.

That’s not to say that festivals, record labels, and publications don’t emphasize dynamic music: just that that inclusion often comes at the tail end of a consensus-making project that sublimates progressive artists into the more regressive mass. Steps have been made towards fair gender representation and historical consciousness of dance music’s roots in black communities, but equity for those communities rarely follows. When equity is offered, it comes with conditions of forking over creative autonomy to institutions who have repeatedly been on the wrong side of history.

In the context of grand historical narratives, much of this discordance can be attributed to the movement of modernist energies. Simply put, developments in rhythm, sound design, and dance are far more likely to occur outside of the traditional hubs of Berlin, London and New York. That those cities are still home to the large majority of dance music’s institutions results in both intentional and unintentional friction. On the nastier end of that spectrum, you have club nights focused on African music with no African artists on the bill, or record labels that exploit the lack of music industry knowledge on the part of artists who haven’t been provided the proper resources.

More common, and arguably more damaging, you have a hype cycle that turns its focus on a scene, whether it be baile funk, gqom, or singeli, for a brief period of time before discarding it entirely. This is not a grand conspiracy, but an inevitable byproduct of a market imperative to perpetuate existing institutions and accumulate capital. It takes time and money to facilitate the establishment of a healthy scene, but it’s fairly easy to allocate a few longform features, a club night or two, and perhaps a BBC or NPR focus hour. As long as tickets and drink sales continue in Berlin, London and New York, there’s no reason why the market would treat emerging scenes as anything but a novelty.

The market logic that drives this reality is neither remarkable, nor surprising. It also seems to be expanding and thriving as the business end of dance music gains in autonomy and confidence. DeForrest Brown, Jr. recently wrote a piece detailing the shifts in the music economy away from album sales and towards a model of “platform capitalism,” as laid out by Nick Srnicek. More specifically, Brown, Jr. points to the consolidation of a dance music consumer market, serviced directly through streaming products, club nights and magazines, but also sold to advertisers as a stable market in and of itself.

Meanwhile, deindustrialization of industry and the financialization of the economy has led to the massing of young people in urban centers as jobs dry up elsewhere. Dance music’s rise in popularity has mirrored that post-recession population inflow, becoming the soundtrack for a gentrified nightlife in the process. With the market consolidated, branded “experiences” and clubs that offer a tasteful, accessible alternative to bottle service excesses are now positioned alongside escape rooms, breweries and wine tastings as a safe, alternative activity. Even more dire, those without the material resources to access a hot nightlife capital are more likely to first engage with dance music via a delibidinized, not to mention parasitic, platform like Boiler Room.

In the Afterwards to Militant Modernism, Hatherley rejects a “journey through the picturesque ruins” and the idea that “possessing the right clothes and the right books” equals a fealty to and an engagement with the modernisms of the 20th century. His unflinching look at the commodification of once radical aesthetic and political movements is also decidedly relevant to contemporary dance music, where all too often the right records, samples, and graphic design stand in for a genuine engagement with the past and a willingness to push through it to something new, challenging and potentially scary.

The lesson gleaned from reading All That Is Solid Melts Into Air and Militant Modernism is not that the idealistic 20th century movements were folly, though. In these myriad attempts, many of which failed spectacularly, to become both the subjects and objects of modernization, humankind has created new linguistic codes, visual languages and urban configurations. More than ever, art that does not shy away from the quotidian and embraces the contradictions of modern life is needed to fight apathy and alienation.

New modernist formulations are needed and dance music is rife with potential. In an essay published a few weeks ago, I laid out examples of recent releases that exemplify what Fredric Jameson referred to as cognitive mapping. In the next part of this essay, I’d like to dive further into music that represents a new, capacious modernism. Across several essays, the late Mark Fisher, elucidated a conception of a pulp modernism that embraces the grotesque, the weird and a “heteroglossic riot of styles and tones.” Fisher’s original essay referred to The Fall, but the ideas within can be applied to a far more dynamic range of contemporary music. More on that tomorrow.