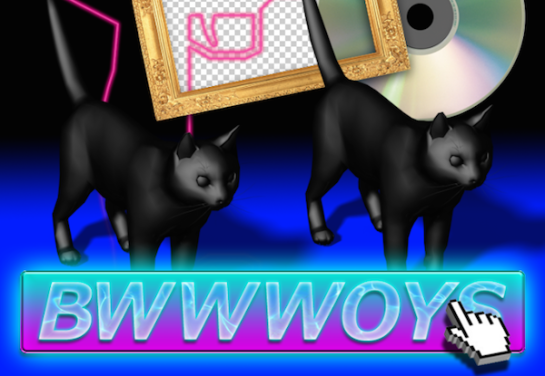 There are plenty of places to start when attempting to decipher web savy duo BWWWOYS, the ostensibly Russian act peddling in PC art and strong arm grime. There’s the Flickr account, a collage of Tumblr art, concert imagery and hair metal cum-Nike motifs. There’s the VK account, the Russian equivalent account where the Future Brown album was leaked months before its release and countless less-than-upstanding wormholes exist. They’re also on Twitter and have their own website, but the confines of Soundcloud are probably where the BWWWOYS aesthetic is best realized and best kept. The constrained image template, never-ending flow of recommended tracks and desperate social apparatus all seem essential to BWWWOYS and their loud, busy take on southern rap, grime and R&B only begins to illuminate where the project begins and, assumedly at least, ends. With only one official release to their name, last year’s #LONGLIVEINTERNET EP, BWWWOYS also don’t have a lot of set-in-stone material to go off of, but via haunting reworks of Thomas White and Vjuan Allure and collaborations with Pixelord and Endgame, their talent has begun to proceed them.

And if the project initially seems like groundless internet posturing, one only has to delve into their Astral Plane mix, a grunting, high strung amalgamating of grime in its most contemporary form, coming off like a submerged version of the aesthetic NAAFI pioneers Lao and OMAAR have achieved. And with a whose who of grime and up-and-comers splayed across its 54 minutes, BWWWOYS entree proves them at worst well researched. On request, no track list for this mix so be sure to pay close attention.