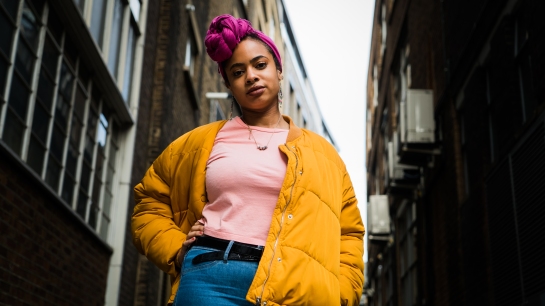 Over the past decade or so, the concept of DJs playing more than one style in a night has evolved from novelty status to near ubiquity. UK critics might attribute this to the refracting of the hardcore continuum while Internet theorists undoubtedly point to the homogenizing effects of platforms like Soundcloud and, to a much lesser extent, Bandcamp, as well as the merging and sublimation of previously insular, localized sub-cultures into the larger contexts of amorphous, web-driven networks. London’s Tash LC seems to effortlessly straddle both worlds, a DJ equally at home playing a historically aware set of West African highlife music or sharing the decks with bleeding edge selectors like Nkisi, Amy Becker and Superficie. The two approaches are hardly at odds in Tash’s world though as kuduro, gqom, afro beat and a range of contemporary hybrid sounds collide in her mix work, which has been aired via residency on Gilles Peterson’s Worldwide FM and an excellent, constantly evolving slot on Radar Radio. By all accounts though, it’s Tash’s live DJ work that separates her from the competition, heard at nights like Wild Combination and her own Kartel and Boko Boko functions.

Unfortunately, we haven’t been lucky enough to catch a Tash set in the flesh, but we have snagged her for an entry into our mix series and the resulting 45 minutes should shed light on what draws fans to her kinetic style. Acoustic and electronic rhythms blend as the mix leaps from style-to-style and genre-to-genre, rarely sitting in one state for more five minutes, while maintaining a consistent mood and narrative throughout. The occasional vocal tune adds a triumphant flair to the 45 minute mix, but Tash is largely beholden to the rhythm, throwing a range of addictive, syncopated tracks into the mix and keeping a steady, hip shaking tension throughout. Beyond her explicit mix work, Tash also writes excellent genre introductions/rundowns for Rhythm Passport and collects on Soundcloud in “Tash Selects” playlists. It’s this fully realized approach and dedication to history and development that lends a richness and contextual awareness to Tash’s mixes and allows her a certain comfort level when playing drastically different styles of club music. Hit the jump for a full track list and download Tash’s session here.