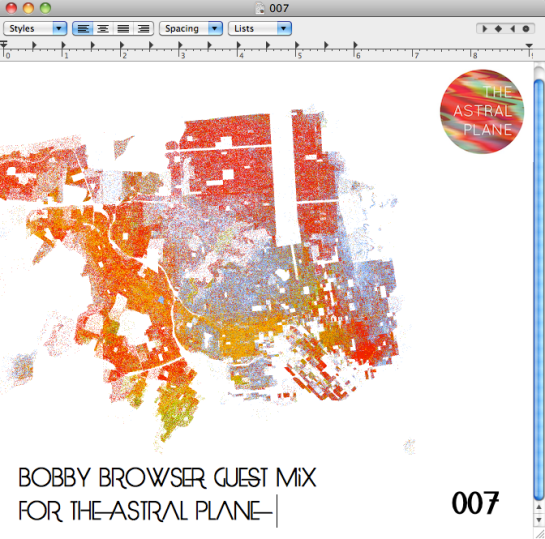 It’s not everyday that you get an electronic music producer who learned to improvise, using a wide range of hardware, before they learned to make songs using software, but that’s exactly what Oakland-resident Bobby Browser did. Born Andre Ferreira, Browser tells of an influential trip to Europe that stoked his interest in dance music and, later, participation in a rotating quartet of hardware obsessives called Party Effects. It wasn’t until 2010 or 2011 though that Browser started recording his own tracks and subsequently linked up with Los Angeles-based imprint (and Not Not Fun sister label) 100% Silk to release the (functionally titled) Just Browsing EP, a four track collection of patient, fulfilling house tunes. Later, Ferreira would release the Still Browsing EP (also on 100% Silk), continuing his exploration of funk-oriented basslines, whispering synth work and delectable restraint. For his Astral Plane guest mix, Ferreira has taken us back to his improvisational days, crafting nearly an hour of free-wheeling beats on a Teenage Instruments OP-1. At times, the mix veers towards meandering beat-less sections, broken only by an acid squelch or a crunchy lo-fi kick drum. At its best, the mix offers an idiosyncratic blend of left-field beat-work and a rare opportunity to peer into the mind of one the most promising West Coast producers. Stream/download below and hit the jump for a list of Browser’s upcoming tour dates!