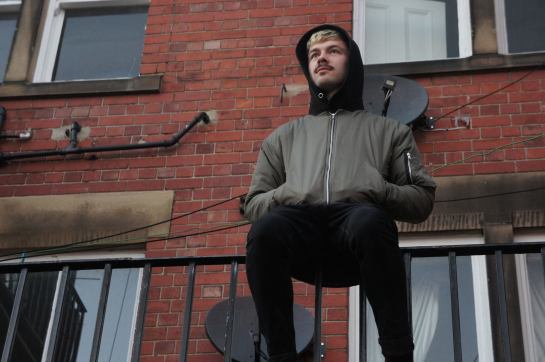 First appearing on Wallwork’s Astral Plane mix in October of last year, Lloyd SB and Wallwork‘s “The Portal” has been one of the most desired dubs around for our team so were overjoyed when the Nervous Horizon folks sent over the promo for Lloyd’s forthcoming Boida Flare EP and it included the track. With a track on the most recent Boxed compilation and support from a huge range of radio shows and DJs, the release of Boida Flare feels perfectly timed and it’s hard not to imagine the EP taking over the clubs and airwaves further over the coming weeks and months. With our longtime obsession in mind, we’ve got “The Portal” on premiere today and if this hyper speed trapped out monstrosity didn’t catch your attention back in October it certainly will now. Based on a single, insatiable lead groove, the track is both a full frontal assault and an exercise in restraint, utilizing as few elements as possible for maximum jump up energy, seeming to exist more in the jungle/drum and bass sphere despite its familiar sound palette. Boida Flare is out June 3 and can pre-ordered here.

London’s Nervous Horizon collective have been hitting the radio waves with an energy rarely found in younger artists, guesting on Rinse, NTS, Radar and Boiler Room with regularity and pushing their tracks into the rotation of as many DJs pushing bizarre, percussive club music as possible. The crew, particularly co-heads Tsvi and Wallwork, have also done an excellent job of pointing out and putting on their forebears, hosting DJ Deeon and DJ Technics on their respective Radar shows. Wallwork in particular has consistently shown an interest in working with classic sounds, whether they be breaks-led techno or ghetto house, in order to build his own unique aesthetic and his output of late has proven that he not only fully grasps the antecedents to his work, but has a firm understanding on how to build on them.

On tracks like “Final Fantasy” and “Impact” (a collaboration with Luru) though, those antecedents are becoming more and more blurred, still apparent in Wallwork’s productions, but increasingly part of an animated, alien whole. Metallic in nature, but unwilling to give in to more industrial, noise-y proclivities, Wallwork’s recent output is unabashedly fun and dancefloor-focused and despite edging into weirder sonic territory with every new track and mix, it all feels innately comfortable. March’s Don’t Panic EP (a collaboration with RZR), the first release on Nervous Horizon, set a firm foundation for Wallwork, built on tireless, machine-led rhythms and a willingness to break out of traditional four-on-the-floor formats. The next step for Wallwork, represented in his Astral Plane mix, is to bring the sort of abstract, spatially aware approach to his club tunes and if the aforementioned “Final Fantasy” and “The Portal”, a forthcoming collaboration with Lloyd SB, are anything to go by, you’ll be hearing Wallwork’s name in wider and wider circles. In hindsight, we all should have been tipped off immediately when Scratcha DVA started championing Wallwork and Nervous Horizon, but the rest of the world is slowly coming around and it’s fair to say that we’ll be hearing Wallwork tunes everywhere going forward.