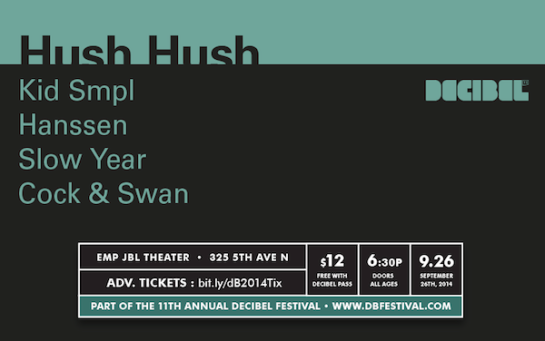 For the next two weeks, we will be featuring different facets of Seattle’s crown jewel of an electronic music event, the consistently excellent Decibel Festival. Considering that Seattle is our hometown and Decibel is one of the most tactful curators of electronic music in the United States, the annual gathering is one of the highlights of our year and more than deserves the praise heaped on it in recent years. The festival runs on a showcase structure, featuring different labels, promotion groups and other tastemakers flexing their creative muscle at Seattle’s best venues. Over the past 11 years, Decibel has grown from a small neighborhood gathering to one of the premiere dance music festivals in the world and over the next few weeks, we’ll parse through the dozens of events to highlight the best and brightest talent the festival has to offer.

Over the past week of Decibel Festival coverage, we’ve pointed our cursors at two showcases, Kinesthesia (Arca + Jesse Kanda, Max Cooper, Total Freedom) and Modern Love (Andy Stott, Millie & Andrea, Demdike Stare), that stopping through Seattle in the midst of truly global tours that will hit dozens of other cities before 2014 lets out. And while Decibel’s growth has allowed the inclusion of highly touted live acts like the aforementioned Cooper and Stott, its roots are still firmly planted in the lush Pacific Northwest and a heartening number of the festival’s key acts hail from Seattle, Portland and the surrounding region. Natasha Kmeto, DJAO, J. Alvarez, The Sight Below and many more local artists will be displaying their numerous talents across a number of showcases, but the single, most condensed collection of local talent at Decibel comes in the form of the Hush Hush Records showcase. Still a relatively young outlet, the discography of Alex Ruder’s label reads like a storyboard of against-the-grain beatwerk, from the fabric (and heart) tearing UK-derived work of Kid Smpl to the richly textured guitar + voice compositions of Cock & Swan.

Hush Hush will be bringing the core of its roster to Decibel and the showcase, taking place on September 26 (Friday) at EMP’s JBL Theater, will feature live performances from Kid Smpl, Hanssen, Slow Year, and Cock & Swan. And while the label ostensibly started as an outlet for the sort of “night bus” sounds intended to soundtrack long, lunar rides on public transportation, this bill has more than enough propulsion to bring any listener out of their doldrums. For a taste a what’s to come next Friday, Hush Hush core man Hanssen was kind enough to contribute a mini mix of key and upcoming label material, all influenced by gauzy hip hop, found sound collage art and rich R&B dynamics. The Hush Hush showcase will not feature the biggest names or stage productions at Decibel, but you won’t find a better representation of the festival’s DIY spirit, inclusive ethos and overall quality control.

If our insistence on attending showcases at EMP seems odd, it’s only because the venue will play host to many of Decibel’s most dynamic performances, dancefloor oriented and not. On any one night, you could witness the hellish choral work of Oneohtrix Point Never, the brilliant harmonics of Cock & Swan and the West African-derived percussive workouts of Millie & Andrea in Seattle’s usual home of rock & roll kitsch. Get single tickets to the Hush Hush showcase here.