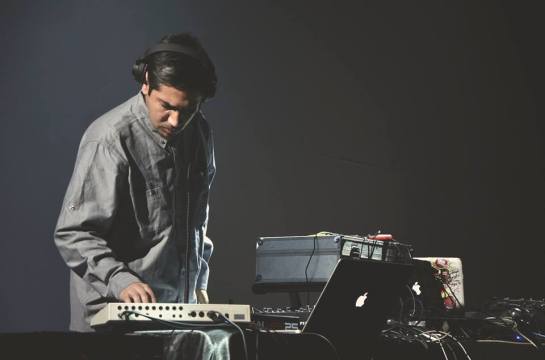 Over the course of the past twelve months, the trans-continental South/Central American dance scene seemed to grow in both confidence in recognition as producers from Chile to Mexico flexed their various reinterpretations of folks musics and dance forms. Moreso, artists like Lao and Paul Marmota, Tomas Urquieta and Imaabs transgressed the traditional world of house and techno, drafting up wildly creative takes on dance music that subverted the hegemonic, often racially inferred physical and technological spaces in their respective cities of Santiago and Mexico City. We snagged Imaabs to lay out his favorite releases of the year, drawing source material from Chilean, Mexican, American and British producers. Enjoy and excuse the language barrier!

A selection is always a constellation, each track has to be able to open dimensions, generating movement, shouts, expressions, the body into a future, that does not subtract and multiply , but rather becomes intense; several of these tracks are instrumental, very percussive, others have voices that produce some recognition, voice, usually on a track is a face in which we identify.

This selection of the 10 most important tracks for me in 2014 focuses on links that open. For example, Rushmore’s “Bitch Please” has been apex at parties I played in Chile and Mexico; Marmota with “Malianteo” reopens a recognition territory between Chile, the apocalyptic vibes and Latin America ; the masterpiece called “Black Jesus” of Vaskular & Valesushi, two Chilean friends, thrill mixed with a Latin-Dembow dimension with Deep House vibes. Meanwhile, Kid Antoine is very European, but an expert in a post-apocalyptic latin dimension and that reminds me of Marmota´s Nueva EP (out now on NAAFI), resonating in such extreme places as Mexico and Denmark.

With transformations in mind, a song from the last quarter is “How About” of Dinamarca x Zutzut, Kassandra’s soft voice resonates much to the work of Kelela, but achieves a density and quite distinct flavor. Tomás Urquieta, my fellow battles, built one of the most consistent Eps I’ve managed to hear in this last year, beyond thinking about the Club, this EP is out of it, or at its limit; Somebody called it a kind of Post-club. Future Brown, opens a window and a way of doing pop, thinking of the club, and this track, Wanna Party, is but a manifesto of those osmosis. Another track that impressed me was the 2014, is the remix by Cyphr to “Moments XTC” of Zutzut and Lao (Extasis/Her), and the original track had struck me, but when he left the remix… I Said: amazing.

Inevitably you can not do a review of 2014 without mentioning Neana; means most of the old continent as USA, considered him as someone to must be listened to; the consistency is not enough, and successes are needed hits to the expected visibility and consolidation; the remix he makes to SPF666 is required in any dj set. Finally another great Latin American producer going to have to talk this 2015, what impresses me greatly is the expertise that takes into percussions, I think unusual and very unlike anything that has been done regarding club music.