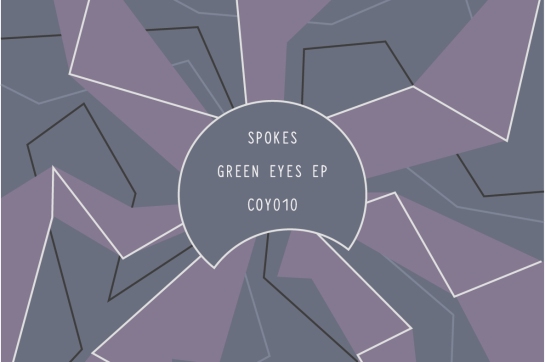 As editor for Mixmag and head of Coyote Records, Tomas Fraser’s curatorial skills have never really been in question, but, as FACT notes, the “conveyor belt”-like nature of the label is continuously surprising. A few weeks ago, the label held their three year anniversary party featuring Dark0, Last Japan w/ Trim and a who’s who of label favorites. Spooky showed up with USBs on hand and, by all accounts, the party was an unabated success, both highlighting the label’s heavy hitters (Last Japan) and younger go getters (Forever Forever, Chemist). On June 1, Coyote will release the debut EP, Green Eyes, from London’s Spokes and a vinyl pressing will follow on June 28. Having already featured mixes from Coyote representatives Chemist and OH91, it was only fitting for Spokes to cook up a mix for the site and the volume he produced is a testament to the eclectic nature of contemporary instrumental grime.

With a remix from E.M.M.A on the tail end, Spokes’ Green Eyes is an effervescent take on a collection of grime’s classic tropes, from an obsession with minor chords to the carefully constructed sub frequencies. “Lo Pan Strikes” and “Mutations” are available to stream now courtesy of Boiler Room and FACT respectively and each has garnered attention from Blackdown, Slackk and other on-the-cusp selectors. Spokes’ Astral Plane mix reads like a roll call of his contemporaries and potential experimental influences, from Yamaneko, Iglew and Sharp Veins to Steve Reich, Bill Kouligas and Lee Gamble. The mix twists and turns from brilliant melody to brilliant melody, blasts of percussive noise entering the picture periodically, but unlike the steady, predictable groove of house and techno, Spokes’ work is deliciously non-linear. And with Green Eyes on the not-so-far horizon and Tom E. Vercetti seemingly in the Coyote staple, the label won’t be running out of starry eyed grime releases any time soon.