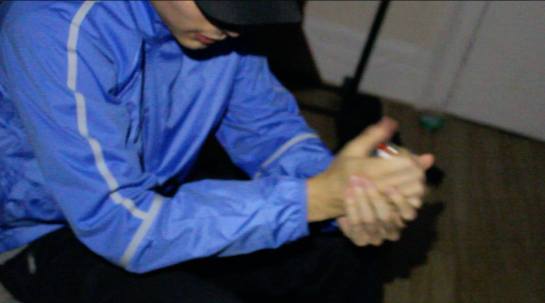 While Tim Zha has worked under the Organ Tapes nom de guerre for some time now, his vocal explorations and lo-fi take on digital pop only recently entered our ear space, the result being near-immediate obsession. Growing up listening to everything from ambient and noise to 50 Cent and Eminem, musical sources drawn from friends and television, Zha split his childhood between China and the UK and now lives in London, taking his place in the sprawling, yet intimately creative cultural metropolis. Recently, the Organ Tapes project has been lapped up by Pitcheno and his machine-minded Tobago Tracks label, Zha’s best track to date “K1. Bu Ming Bai” appearing on a TT single several months ago.

Working with and taking inspiration from the sounds of dancehall, afrobeat, bop and Future, Organ Tapes sings in a low slung, sultry manner, both swimming in the pool created by his influences and taking them beyond the cloud cover into another, moon-drenched environment. Like fellow newcomers Malibu and Blaze Kidd, Zha is re-instituting the role of voice in club-not-club music, utilizing motifs from a place-less club world in his beatific covers and originals. And with a special, vocal-focused mixtape on the way, it’s easy to see that Zha is becoming increasingly confident in his voice in song writing, not to mention his acumen with roughneck club tracks that are also on the way. Throw on Organ Tapes’ Astral Plane mix and scroll below for our Skype talk with the artist, touching on the topics above as well as his thoughts on the club, ascension and his roll as a live performer. This is one of our most non-dancefloor-oriented mixes in a while so get cozy and delve in.

What were your first experiences listening to hip hop and R&B?

Pretty much as far back as I can remember I’ve been excited about hip-hop music. I remember 50 Cent and Eminem videos on MTV Asia  / Channel V really exciting me as a child, but it wasn’t until I was a teenager that I really got into rap & RnB. At the same time I was probably equally if not more into guitar music and ambient and noise music. I don’t think my environment growing up made any one musical form or set of aesthetic references feel naturally dominant or the norm. Or maybe I’ve just always been resistant to the idea that any one form or style can be function as dominant or the norm for me. There’s a lot of freedom in moving between and drawing upon a wide variety of forms and styles, but that also brings with it certain anxieties over whether I’m meaningfully or appropriately interacting with them…

I met Robert (Pitcheno) and the rest of the TT squad through a friend who does the label’s graphic design work. I think not long after we met TT started gravitating away from being a more club-focused label and what I was doing kind of fit the bill for the sounds they were wanting to start expanding into. I’m super grateful for their support because before linking with TT no one really knew or gave a shit about any of the music I made – Organ Tapes is an old, old project.

As for our creative relationship, I think it’s developed quite organically. I think Robert knows that I can be quite private and controlling about the way I work but “K1. Bu Ming Bai” was made really smoothly and organically despite me being unused to much collaboration. It was definitely a different process to how I work on my own but I’m hyped on it.

There’s an interesting cohort of London artists pushing Caribbean sounds and reinterpreting R&B in interesting ways. Endgame, Kamixlo, Blaze Kidd, Malibu, etc. Do you guys get together to talk and share ideas or is it more spontaneous? -Are you excited by what’s going on around you?

Yeah, there are definitely a lot of people that are doing a lot of exciting things in London right now. I don’t really know a lot of people personally to be honest, but I’ve spoken to Endgame a bit and I have huge respect and love for everything him and the rest of the artists you just referenced are doing.

Although London is definitely a hub for this kind of cultural activity (London is a hub for cultural activity in general, tbh), it’s definitely not a geographical movement.  So many people all over the place are making music that is reflective of and responsive to our present historical moment. A lot of this music is quite political (consciously, in addition to the inherently political aspect to all music) and I don’t think that’s a coincidence… Hand in hand with the establishment of a “post-club”, “post-generic” sound and redefinition of the club as a space that so many of the artists you just mentioned are engaged in is a broader will to redefining oppressive dominant narratives and reclaiming the idea of “neutrality” from them, attempting to replace it with something broader and more inclusive.

With that being said, although I think it’s interesting and exciting to see the Internet generating these quite Utopian artistic impulses, I’m also wary of overstating its potential for instigating real positive social or political change on any broad scale…

Do you see yourself as a singer / vocal artist? -Which contemporary vocalists do you take inspiration from?

I sing on my tracks, so yeah, I am a singer, but it’s not the first thing I’d identify myself as. I’m definitely a bit anxious about being regarded as a vocalist first. I don’t sing because I see myself as a singer; generally, I just sing because I want vocals on my tracks and because I’m incredibly compelled by vocals in general. At the same time I’m really happy that people have responded well to my vocal tunes and given me encouragement in that direction.

Dancehall, afrobeat and Chicago bop vocalists are all huge inspirations for me at the moment. Alkaline is pretty much top dog right now imo. The range and expressiveness of his voice is amazing. Sicko Mobb, Timbo, J Hus, Johnny May Cash… There are so many great vocalists out there at the moment. I think my number one inspiration for vocals is Future tho. These have all been men but I guess that’s because I can more easily attempt to sound like them lol… Malibu is another favourite right now though, her voice is so good.

Do you perform live? -How does your original work generally go over with crowds? -Do you see your music working best in a club context? If not, where do you see it as most functional? -And what is your dream venue?

I haven’t actually performed “live” live yet, just DJed on a laptop… I think for the time being at least I want to stick to DJing. Although I listen to a lot of club music I don’t really approach performance or DJing from that perspective. I like DJ sets that don’t seem focused around consistent genre or BPM or how much the crowd is dancing… or that mix the kind of confrontational element of harsh noise of hardcore shows with the euphoria of ATB or someone like that… like playing harsh noise or acapellas or field recordings alongside really sweet, melodic music.

I love the idea of my music being played in clubs but at the same time it’s pretty lo-fi and all made by someone who doesn’t know anything about how tracks should be made to sound good in clubs… I don’t make it with a club context in mind at all though, generally.

Your reintepretations of songs by Shaggy, Kanye & Future, etc. are what initially drew us to your music and despite the source material being pretty obvious, they really take on a life of their own. Do you view them as covers, remixes, homages or something else entirely?

I wouldn’t call them reinterpretations so much as references. It’s just musical intertextuality in my mind. With the Future bars in “K1. Bu ming bai” I just had that melody playing in my head over the beat as we were working on it. The Shaggy one wasn’t even a deliberate reference at the time, I just realised after I made that song that it sounded like ‘It Wasn’t Me’ lol. I think that’s kind of indicative of the misguidedness of seeing overt references to other music as distasteful or as necessarily diminishing of creative achievement though. I’m trying to be transparent about or acknowledging of the fact that nothing I make comes from nothing, and that nothing I make really originates entirely from “me” in any pure sense.

Your And 1 mixtape is coming out soon and it ranges in tone from sort of bizarre spoken word pieces to pumping machine techno. How did the tape come up about and is there a mission statement behind it? -Is there a reason why you’re calling it a mixtape versus an album?

I actually changed the tracklist a fair bit from the version you first heard.  I took out the more techno-y or club orientated tracks and tried to make it more cohesively focused on vocal tracks and a couple of instrumentals that worked alongside them. I like to make a lot of different types of music but I came to think that my initial compulsion to represent that in the mixtape tracklist was unnecessary. I guess I want to make something that feels more like a total cohesive work than some “intro to Organ Tapes” type thing.

There are themes of ascension, angels and heaven on tracks like “Fly Higher”. What do these themes means to you and how are they realized in your aesthetic at large?

All of the Christian imagery and themes come from being brought up Christian by my mum. I don’t identify that way anymore but it’s definitely influenced by thinking a lot. The motifs of Angels, heaven, prayer, etc. are to do with the idea of communion with God in the sense of communion with an external body and the impossibility of any such gesture except through faith. In general I’m quite concerned with the power of faith in overcoming failed gestures. So many things we take for granted are built around faith in language, but I can’t help but regard language as a failed gesture in many ways, for example. But I guess the triumph or failure of language depends on your capacity for faith. The thing is, I’m not sure I’m someone who is capable of much faith normally, so music for me is maybe some kind of externalised space in which I can locate the faith I feel I lack internally and attain some kind of security or stability in a world that I feel is built so much on precarious faith. Or, it’s my communion with the Holy Spirit in this word-life that I lack faith in 😉

Do you have any other projects on the horizon? -Songs you’d like to cover? -Live shows?

I want to put a small collection of more club orientated or like weird house tracks that I’ve got floating about at some point. Also been working on stuff with Malibu which I’m really gassed about… her stuff is amazing.

3. Coprocephalic – The Oath of Relinquishment

21. AF85 – alive with the magic of human endeavour