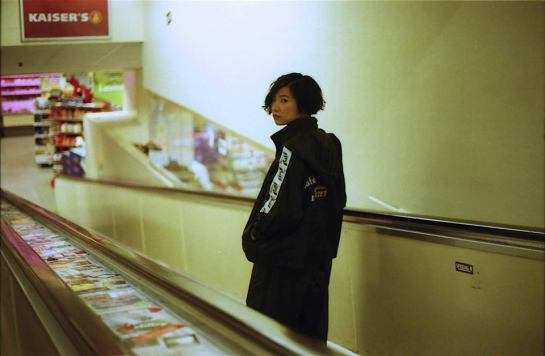 The trend towards dark, noisy and industrial club sounds over the past few years has been well documented to the point that an ostensible split between “constructed” and “deconstructed” has supposedly arisen. This narrative ignores larger aesthetic cycles — hardcore manifesting as jungle for example — in the history of dance music, but does hold some credence in the current moment. A question that always comes to our mind though is which artists and DJs will be viewed as the true devotees and ambassadors of this relatively new turn towards abstraction and experimentation? The forebears are easy to point out — Eugene Carolus’ excellent article on the legacy of Total Freedom outlines the globetrotting hellraiser’s influence while the now defunct Vex’d duo (Kuedo and Roly Porter) have their fingerprints all over innumerable contemporary acts and Elysia Crampton’s work is less imitated than it is revered — but the task of mapping out a younger generation is a far more difficult task.

Dis Fig is a Berlin resident and co-founder of the Call Dibs show on Berlin Community Radio. She’s also a member of the PTP crew and laid down a stand out set at their Boiler Room event in June 2016. Cuing into a sound that is at once cerebral and emotionally sincere, the American DJ has touched a nerve in the past year or so, displaying a weathered aesthetic that draws together sounds from across temporal and sonic boundaries into holy union. Blends of SHALT and the Supremes, Emptyset and Danny Brown, and Air Max ’97 and Oklou have provided momentous touchstones while every new Call Dibs, the BCR show she hosts with hunnidJAWS, features an exciting slew of hard-edged new material and guests like Chino Amobi, Soda Plains and Madam X.

Floating on the periphery of dancefloor relevance, Dis Fig mixes are dense, textural affairs, full of voices calling out of the abyss and instilled with a deep sense of pathos. A conjoined intensity is drawn from amorphous club experiments as much as soundsystem tools, as well as the occasional sultry R&B and testosterone-driven rap — an intensity that is unwavering in its connection to the core idea at play in each respective composition. As noted above a lot has been made of the darker turn in club music, but that’s a simplified take and it’s hard to think of many DJs who consistently bring together the inconsistencies in darkness and light, comfort and anxiety and abstraction and uniformity. Her Astral Plane mix is no different, beginning with reverberating entries from v1984, Club Cacao and City before exploding with violent energy and hitting a stride with outsized tracks from DJ Sinclair, Celyn June and Goth-Trad. It’s a gut punching selection and a mix that feels very much of our time, full of the sort of contradictions and delirium that have come to define public life. Dis Fig is playing Norient Musikfilm Festival in Bern, Lausanne and St. Gallen, Switzerland this weekend.