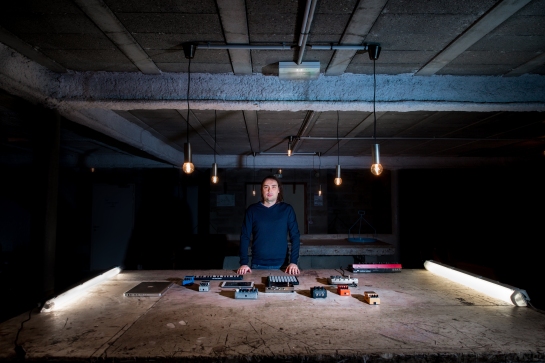 The world of experimental electronic music is both rife with artists seeking to present their work in an immersive light and completely lacking in the funding and professionalization needed to make large scale audio-visual projects possible. DIY scenes exist on the margins without access to suitable venues and spaces while both public and private funding often constrain creative aspirations, or in the case of the United States, are largely limited to more traditional artistic expressions. French producer and composer Eric Raynaud aka Fraction feels like an exception to the aforementioned rules, an artist whose work is immersive in both its live and recorded incarnations and who has a deep understanding of the intersections of audio, visual and physical space.

With only two official releases in the past decade, Fraction’s work doesn’t fit into the traditional music business model, but one only has to read about and watch video from performances like ENTROPIA and DROMOS to understand the level of conceptualization (not to mention time and effort) that goes into each of Raynaud’s respective projects. ENTROPIA, initially performed at the IX Symposium in Montreal, features a geodesic sphere outfitted with audio-reacted LEDs, all situated within a room complete with projection walls. The video alone demonstrates the all-encompassing nature of the project, while Fraction’s music, spacious and glitched out, is transportative in and of itself.

For his Astral Plane mix, Raynaud gathered a range of music from China, drawing on everything from abstracted sound design to fractalized beats and more overt peak time club moments. It’s a vivid selection that feels like a natural extension of his own recorded work, both tactile and always in motion. Familiar rhythms weave in and out of the mix, interspersed with granular noise and a smattering of organic instrumentation. Fraction is an alumni of the SHAPE Platform. More info of his involvement can be found in an interview on their website.