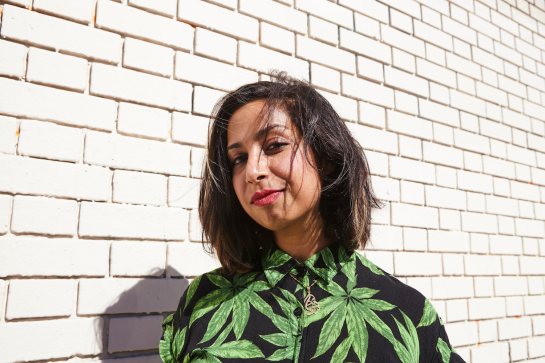 NTS Radio‘s programming is littered with huge names, but it’s the station’s odd ball thematic shows that make it such a joy to listen to on a day-to-day basis. When NTS opened up their Los Angeles station, they were especially astute in bringing on Sasha Ali’s Miss Modular Radio for a monthly show. Formerly airing on Boyle Heights’ Radio Sombra, an operation housed in Espacio 1839 that is currently in a transition into a “more concrete and revolutionary media entity,” Ali’s show is focused on “womxn-powered musical selections” and has been a staple since we first came across it sometime in 2016.

The format ranges from show to show, but each hour is generally composed of interviews, loose selections from the hip hop, experimental and electronic music worlds, as well as blistering guest sessions from a range of talented club DJs. Sessions are often freeform in terms of style, genre and composition, but womxn are always centered and the resulting milieu is vibrant and varied, linked more by an earnest affect and desire to push forward than any particular aesthetic.

Contemporary DJs like Bearcat, Erika Kayne and Helikonia have all  been featured on the show, but Ali has also found space for a wider purview, inviting accomplished solo artists like Low Leaf and Kilo Kish on, as well as archivist and punk provocateur Alice Bag. Ali’s own selection are similarly varied and polychromatic, running from blissfully emancipatory jazz and soul on to the best hip hop that LA has to offer and on to a range of Latin American club musics, both classic and contemporary.

Her Astral Plane Mix takes a similarly heterogeneous approach, drawing on experimental music from womxn of SWANA (Southwest Asian and North African) heritage. The selection was born out of an opening set Ali delivered for a show called “A Night of Arabic Hip-Hop and Poetry” at the Ford Amphitheater in Los Angeles. 8ULENTINA, Deena Abdelwahed, DJ Haram, Fatima Al Qadiri, Ikonika and Thoom all contribute key passages to Ali’s mix, as do multi-talented Egyptian vocalist Nadah El Shazly and French-Algerian R&B impresario Ta-Ra. True to its original intention, the mix has a distinctly live feel, frantically leaping along an electrical wire with a core energy that supersedes groove.  Dive into Miss Modular’s essential archive here, hit the jump for a track list, and download the mix here.