We hit the NTS studio for the second time in September last Friday and brought along Julien, a DJ and producer spending the summer in Los Angeles. With releases out/forthcoming on Tobago Tracks and Apothecary Compositions, the Denver resident brought a deluge of hardcore techno to the table for his 45 minute session, ratcheting up the tempo and bringing out a brutalist energy. His mix begins at the 45 minute mark and runs until 1:30. Our session features new Bell Curve, VIOLENCE, Torus, Dane Law, Fatima Al Qadiri, Alex Compton and more. Download available here and track list after the jump.

END_OF_DOCUMENT_TOKEN_TO_BE_REPLACED

Having flit around the periphery of a number of sounds in recent years, January 27 will see the release of Canadian producer Spurz’s debut album on Apothecary Compositions, a self-described exercise in opposites and juxtapositions. Now residing in London, Spurz’s sound can generally be considered within a UK sphere of influence (grime, jungle, dubstep, etc.), but the Loud Futures LP is anything but a strictly hardcore continuum-derived record and generally thrives in abstraction, tying in dancefloor relevance to the sorts of bizarro synth escapades and punchy drum programming that is best described as state-less. “Damu Recall” is a case in point, a minimalist track that starts with organic bits of percussion and hoover bass before transitioning into a high energy stomper that ends just as abruptly as it begins. Like much of the recent material on Apothecary Compositions, the song and album fall into an intriguing middle ground between home-and-club, UK and US, relevancy and abstraction, etc., which are exactly the sort of complicated juxtapositions we tend to enjoy delving into. Loud Futures is out January 27 and can be pre-ordered here.

Across releases for Coyote, Local Action and an excellent self-released EP (all in the last six months), Abeedeen-based T_A_M has shown off an ability to excel across a number of genres of styles, traversing from funky lo-fi house to cut up 8 bar grime and beyond. Neither Watty (Coyote) nor Silk/Sweat (Local Action) came off as anything but natural though and despite working in so many different sonic realms, T_A_M maintains a level of comfort and a low-slung consistency across all of his work. Next Friday (May 13), he’ll release his debut album, titled In Tandem, through Druid Cloak’s Apothecary Compositions label and the results are rather stunning, seeing him take a step back from the dancefloor to approach various ambient, new age, grime and pop tropes from an impressively delicate, immersive perspective.

We’ve got “Bleak End” on premiere from In Tandem, one of several album highlights that, like much of the more abstract material on Gobstopper, could very loosely be called grime, but is about as far removed from the genre’s roots as you can get while still maintaining a few recognizable motifs. Kicked off with reverb-heavy piano and a sickly sweet vocal that sounds like it’s coming from a child, “Bleak End” is the type of sad song that lets your thoughts wander as the piano melody seems to wander off, only drawn back in by the whip cracking sound and lightly throbbing sub bass. It’s angelic without being corny and classically beautiful without coming across as morose all while balancing a very contemporary sound palette with a structure and atmosphere more befitting of a post-rock album. In Tandem is out next Friday and the good people at Apothecary have pressed the record up beautifully so go cop that and enjoy “Bleak End” in the meantime.

One of the most active artists in the Classical Trax online community, Norway-based Morten HD has shown off a remarkable work ethic over the past several years, turning out quality originals, edits and mixes at every turn and refusing to measure down his polyglotic approach to a multitude of club-oriented forms. The Xenoglossia LP is out Friday on Druid Cloak’s Apothecary Compositions and is Morten’s host complete project to date, 16 tracks of roughhewn grime with sojourns into noise, jungle and techno. It’s the sort of record that clearly exists in the context of the internet, but is also perfectly ready for club play at a moments notice. “Pink Light Incident” is a Xenoglossia standout and features one of the more jarring arrangements on the record as hurtling noise, church bells and what sounds like a deranged fax machine conglomerate around stop-start drum programming. Xenoglossia is out Friday and pre-orders for the cassette and digital versions are available here.

After the resounding success of Druid Cloak‘s Lore: Book One and Lore: Book Two, the conceptual LP series, released through his own Apothecary Compositions label, is getting a “translated” remix version with a little help from an international group of friends. In line with the original’s theme, Strict Face, Spurz, Throwing Snow and a number of others have put in there hand to rework originals from Lore: Book One, offering up some fantastical takes on standout tracks “Quills”, “The Tusk and “Wraithborne Falls”. We’ve got Strict Face’s contribution on the premiere front today, the Australian producer lacing the original with a helping of sparkling keys and heaping low end. It fits in the Gobstopper/weightless vein (even though it involves percussion), moving at a slow gait without giving up bass weight or a sense of forward propulsion. Lore Translations: Book One is out August 7 on Apothecary and is available for pre-order here.

The second chapter in Druid Cloak‘s Lore LP series, Lore: Book Two is an extravagant journey through an imagined world, replete with cinematic flourishes and of-the-moment beat touchstones. A soundtrack sans movie, Lore: Book Two points to a number of contemporary club production techniques before eventually removing them from context and destroying them. But unlike, say, the Janus collective who follow a similar path, Druid Cloak never really brings the songs back to the club. That’s not to say that none of Lore: Book Two can or should be played out, but the album as a coherent entity isn’t exactly suitable for peak time. Out of the entire tape, “Obsidia Chroma” might just be the track most ready for the dance, a harmonically focused journey that builds into a larger-than-life crescendo that doesn’t spare the angel vocals. You can catch Lore: Book Two via Druid Cloak’s own Apothecary Compositions on May 19 and pre-order the album here.

As footwork has proliferated across the globe in the past decade, its borders have shifted and mutated, merging with jungle, acid and other dance forms. Unlike other localized sub-cultures that are rapidly engulfed in the global market, footwork’s mutations have been driven first and foremost by the Chicago’s Teklife collective and not American and/or European producers with no tangible connection to the Windy City’s musical lineage or dance culture. So after an initial explosion and some unfortunate attempts by outsiders to replicate the sound, it appears that the replication process has slowed and global producers have begun to work upon and expand on the ideas set forth by DJ Rashad, Spinn, Earl and more. Residing in Hamburg and Berlin respectively, B-Ju and Ticklish are prime examples of that cycle, artists well outside of the Chicago orbit who have, nonetheless, become adept at soothing the uneasiness of the footwork sound into their own production aesthetics. On Tuesday, February 24, B-Ju and Ticklish will release a joint effort, the Dualities EP on Druid Cloak’s Apothecary Compositions, melding their prowess in footwork, jungle and other hybrid forms across two collaborations and several remixes. Today, we’ve got the title track from the EP, highlighting the duo’s ability to flip dusty breaks into a soulful melange that dazzles as much as it soothes. Pre-order Dualities on cassette here and get a download of the full EP immediately. 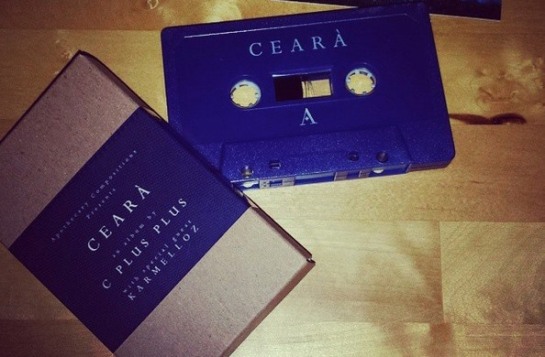 As Apothecary Compositions has expanded from a small, cassette-focused club music imprint to a huge online store featuring releases from PAN, Tri Angle, Hyperdub and more. While a discerning onlooker might expect the label side of the operation, headed by Joseph Morris aka Druid Cloak, to look for bigger, more populist artists in tandem with the web store’s expansion, they would be mistaken. Instead, Apothecary is still one of the foremost outlets to find up-and-coming club music flexing their abilities. Portland, Oregon’s own C Plus Plus is the latest to join the roster, bringing the Cearà LP to the Apothecary shelves. Heavily featuring fellow Portland resident Karmelloz, the two have already released a joint 7″ for Hallowed Articles, the four joint tracks show remarkable chemistry, a blend of C Plus Plus’ driving club rhythms and Karmelloz’s elegiac house flow (seen on labels like 1080p and Hoko Sounds). “Gunshot Riddim” is our favorite of the bunch, a riddim flavor packed with ballroom energy and a cyclical vocal sample at once lulling and invigorating the track into the next bar. Cearà cassettes are shipping now so get yours before supplies run out.

It’s with great pleasure that we can now announce that Astral Plane Recordings and Druid Cloak‘s Apothecary Compositions label are entering into a partnership to give Heterotopia (out now in digital form!) a physical release. As both a label and distributor, the Apothecary team works tirelessly to release well-rounded, fully-conceived statements and recently, they’ve been working with a number of digital-only labels (like us) on physical releases. In mid to late November, we’ll be letting loose a limited run of Heterotopia cassettes through the Apothecary store, an exciting opportunity to give all of you a physical memento of the compilation and an experiment in bringing club tracks to magnetic tape. The cassette will also feature two never before heard bonus tracks from Piri Piri and Chants, which will be revealed in the lead up to the release, as well as some creatively re-conceived art work. This partnership was easily ordained and placing next to labels like Night Slugs and Warp in the Apothecary web store will hopefully bring about some new exposure for us and the artists we work with. If you haven’t checked out Heterotopia yet, stream below and if you like what you hear, pre-order the cassette now!

END_OF_DOCUMENT_TOKEN_TO_BE_REPLACED

Since its inception in August 2013, Druid Cloak‘s Apothecary Compositions imprint has become something a meeting point for artists from across genres, continents and sensibilities. The label has a credence for pushing out a physical product after all, cassette and vinyl mostly, and brings in a number of disparate remixers for virtually every release. The physical element, combined with Druid Cloak’s strong sentiments for jungle’s diffracted contemporary form, has led to the likes of Addison Groove, Om Unit, Visionist, Helix and others taking on remix duty, aiding and abetting relative newcomers like Imami, Galtier and, most recently, Wild Kid. The latter is a new kid on the block residing in New York and plying his trade in milky, Port Arthur-referencing beat work. The New Bethlehem EP is his first on Apothecary Compositions and while the entirety of the tape is easily digestible and a closing Slugabed rework adds some heft to the palate, Celestial Trax’s remix is the crown jewel of the package. A patois vocalist is sent into the mix to match up with Bun B’s invectives and CT flips the lead melody from couch slouching pleasantry to schizogenic, back alley menace. It’s quite a transformation, but considering CT’s recent output (and upcoming track on our own Heterotopia compilation), it comes easy for the New York transplant. Pre-order Wild Kid’s New Bethlehem EP here and peep Apothecary’s web store for a number of limited deals on past physical releases.