Coming off the back of a second Boiler Room appearance, this one facilitated by Teki Latex, London’s Nervous Horizon crew is riding high, seemingly popping up on hotly tipped label’s release schedules and remix packages everywhere while continuing to settle in on their own crew/label-specific sound that’s becoming increasingly unmissable with every new release. Meanwhile, the Infinite Machine outfit has continued its upward swing in 2016, releasing an exciting debut from the Tropical Waste representing Iydes and a startling, drop-heavy EP from WWWINGS. The Montreal/Mexico City-based label’s next release comes from Los Angeles-based Alfred English, a graphic designer and producer who has plied his trade in the slick web-centric art and the artificial strains of metallic club music over the past few years.

Taking on English’s “Piston” from the EP of the same name, Nervous Horizon members Tsvi & Luru, who are quickly becoming a formidable duo, have flipped the relatively straightforward original into a towering effort that alternates between breakneck four-on-the-floor sections and brass-y, larger-than-life interludes. With its laser and pulse sounds, pumping sheet metal percussion and Godzilla’s arriving horn work, the London-based producer’s take on the original borrows from a number of recognizable tropes from the past few years, but by virtue of compiling them in such a complex, enveloping manner the two succeed in making the track well more than the sum of its parts. Piston, which also features remixes from Patrick Brian, WWWINGS and ETEVLEH is out on April 29 via Infinite Machine. 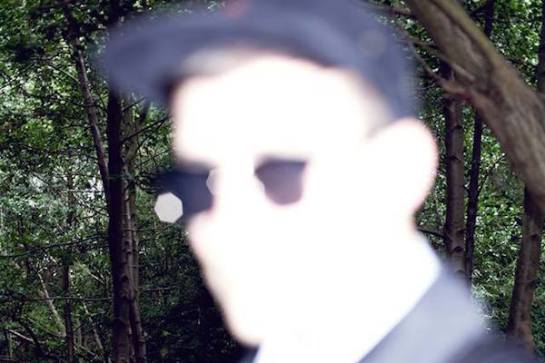 Since last year’s Malfunction EP, Tsvi’s sound has seemed to condense and expand in equal measure, his sparkly overtures into boogie funk-inspired work have mostly gone by the wayside in favor of halting metallic efforts like “Something” and, more recently, the London-based producer’s edit of Scratcha DVA’s “The End”. The cut up synth work and shimmering surfaces are still there, but in some cases, Tsvi has gone in another direction, offering up banging four-on-the-floor techno (see: “Aquaflush” and his remix of Drones Club’s “Changeling”). Maybe it’s the dialogue with DVA, Mickey Pearce and other likeminded artists, but Tsvi, and Nervous Horizon in general, has been delving into increasingly bizarre, entangled forms of club music and the results are jaw dropping across the board.

There’s no release date yet, but Tsvi’s Set You Free EP will mark the second solo release on Nervous Horizon (after Wallwork & RZR’s Don’t Panic EP) and, if you’ve been listening to Tsvi & Crack Palace’s Radar Radio slots or the Swamp81 Rinse show, you’ll recognize much of the direction the artist and label are beginning to embark on. Across several solo tunes, a collaboration with Luru and remixes from Lokane and Luru, raw, machinic noise is the modus operandi on Set Me Free, whether that be scraping snares or pulses found throughout. The Nervous Horizon crew is packed with talent these days and yet Tsvi still manages to shine through each and every time, delineating exactly what makes the label so unique while pushing it further. Be on the lookout for more news regarding Set You Free and check out a radio rip of Luru’s edit of the title track after the jump.