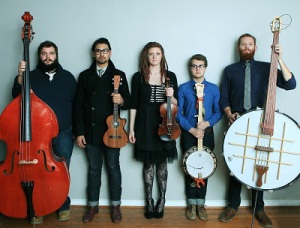 I thought it was about time to post on this album. You know when you find that one great song that fits perfectly into your day or week and makes you go around showing it to everyone? Or maybe you keep it a secret because it’s just too good? The former is how I have felt about this entire Seryn album. Seryn was formed in 2009 and is composed of 5 band members who can all play a wide variety of instruments. For any fans of Mumford and Sons, Edward Sharpe and the Magnetic Zeroes..etc you need to give this album a listen. Check out the title track off of their debut album, This is Where We Are below.

In an interview on Addicted to Shows, it’s clear that these are only half of the instruments that could be put into the album. When asked about their creative process for songwriting and choosing the right instruments,Nathan said;

A song starts with guitar, ukulele, or banjo.  Then we just start adding stuff, and taking stuff away, and then adding it back in.  We try a lot more stuff than ends up in a song, which is why you have yet to hear  euphonium, electric organ, bag pipes, marimba, tin whistle, slide guitar, or hammer dulcimer in any of our songs. Vocals come later, and the harmonies are worked out very quickly, our bassist, Aaron, is a genius.

The wide variety of instrumentation accounts for a plethora of different melodies and harmonics. The masterful and selective use of these instruments can be seen in this live performance of “Beach Song”. They were named best show at SXSW 2011 by Paste Magazine. A very hard distinction to achieve at such a large music festival.  The quality isn’t all that good but you can see the emotion put into the set. Look out for these guys because they will most definitely be on the same path as Mumford and Sons. Expect an EP coming out towards the end of the year combined with tons of tour dates. The entire album can be streamed off of their bandcamp and this is one album that I was very proud to have purchased.