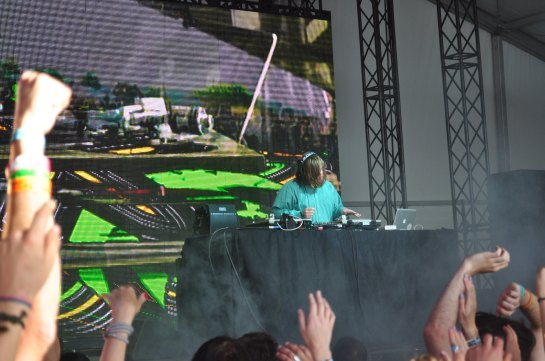 There weren’t many artists more suited to play Sasquatch than Star Slinger due to his grizzly appearance. The Mancunian producer/DJ eschewed his trusty MPD32, instead opting for two Technics and put on a whirlwind display of turntable mastery. Star Slinger has cemented himself as one of, if not the, best hip hop producers in the UK, but he’s still relatively unknown on this side of the Atlantic. Once he took the stage in the Banana Shack though, there was no doubt he was going to make his presence known. Starting off slow with a few selections from Volume 1, Slinger quickly turn’t it up playing “Chain Dumbin” featuring Juicy J and Project Pat and the crowd followed in a starkly un-family friend fashion. Before long thousands of white people were doing the Larry David to Sound Pellegrino Thermal Team’s “Pretty Pretty Good” and chanting “Kobe Bryant from the Lakers, now that’s paper” to Juicy J’s cult hit “Who Da Neighbors”. There aren’t many DJ’s out there that can effortlessly, and I mean that, transition between off-kilter club cuts (“Pretty Pretty Good”) to blissed-out summer jams (“Mornin”) then back to trappy hip hop tracks (“Bad Bitches”). Although the crowd was on the smaller side, they were easily one of the more in tune with the music crowds, chanting every word with aplomb.