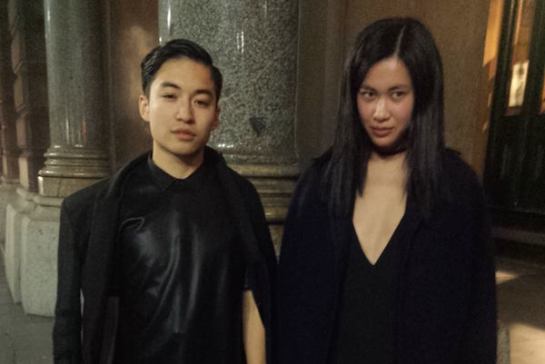 Having hosted several balls with MikeQ, including one this past weekend, and worked extensively with Divoli S’vere, it’s fair to assume that Sydney-based duo Victoria Kim are one of the most far flung nodes in the ever-diffracting world of ballroom. That being said, Vic Kim aren’t just another non-East Coast act throwing “ha crashes” on their productions. Instead, Justin and Victoria are functioning in a similar way to Fade 2 Mind’s increasingly disparate collection of artists, conjoining the New York sound with grime, R&B, southern rap and K-pop in a sort of global drum track continuum. And along with fellow Australians Air Max ’97, Strict Face and Dro Carey, Victoria Kim have formulated their identity in direct opportunity to the country’s obsession with house and techno, rejecting local club culture pro forma and looking to London, New York and the Internet for prime inspiration.

With their “Kowloon Edit” of Rushmore’s “Moment X” on this week’s release of Heterotopia Remixes Vol. 2, it was fitting to bring in Victoria Kim for an Astral Plane mix and their brisk, edit-filled take is an absolute joy. Throughout the mix, Vic Kim make an effort to draw together their favored aesthetics, not just by mashing and blending them together, but by by drawing tangible, stylistic lines between Kevin Jz Prodigy, K9, Rich Gang and K-pop acts like BIGBANG and WINNER. It’s a world where the vocal eccentricities of Young Thug feel at home next to BIGBANG’s G-Dragon and the gruffness of grime MC K9 seems to feed off of Kevin Jz Prodigy’s manic spitting. It’s a thrilling run through these connections, but one only has to look to Victoria Kim’s own productions to find more, from the recent Divoli S’vere-featured Kiko Kicks EP (out now on Car Crash Set) to the pack of K-pop edits that have been popping up in mixes since early 2014. And while last year’s edits are still getting play from a global array of DJs, Justin and Victoria are on to the next thing, ripping through peace edits, cross-generational club tracks and whatever is bubbling up on Soundcloud with ruthless efficiency.