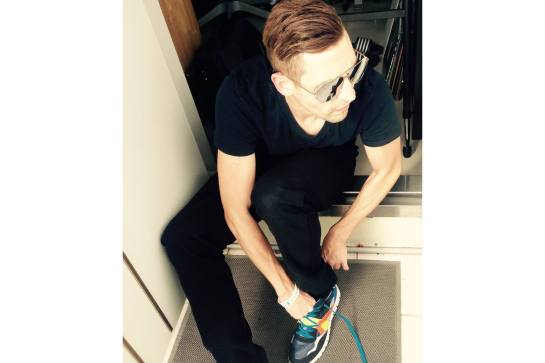 DJ Hulo isn’t exactly a huge name on the global club music circuit, partially because he’s located in Taipei, but mostly because his blends and mixes function almost entirely in their own lane, combining dancehall and grime with epic soundtrack work the likes of Hans Zimmer and Ryuichi Sakamoto, a quite literally cinematic approach to club dramatics. Edits of Wiley, Shabba Ranks and Gage/Sudanim have become set opening staples for us since first coming across Jamdown 2 last year and the mix series quickly became one of our favorites, full of the sweeping emotional range of Oscar-type movies, ebullient nature of Jamaican music and the syncopated thrust of contemporary UK dance forms. We’re proud to host Jamdown 3 as DJ Hulo’s contribution to the Astral Plane mix series and we spoke to the artist to get an idea of what he’s currently working on, the background for the series and an idea of his favorite composers. He says it far better than we ever could so press play on Jamdown 3 and scroll down to get some insight into one of the most unique DJ-composers anywhere.

Hi Tom, how are you? Where are you answering these questions from?

Hi Gabe, I’m very good thanks! I wish I could say I was on the beach, sitting by the sea, but unfortunately I’m in a studio in Taipei.

What’s the background of the Jamdown series? When did it start and what was the original motivation behind it?

I was watching a number of Jamaican films a while back, and kept hearing them referring to the island as Jamdown. I liked the sound of it, so thought it would be a good name for a mix series. Around the same time, when I still lived in London, I played on SubFM with Blackstarline/Jamie Rodigan and Mindstep, DJing Dancehall and Reggae. I always loved mixing the Caribbean sounds with more deep, ambient sounds – weirdly, the contrast of bright energy and melancholy jelled. I came up with an edit that went a step further, sampling the string section from the original Psycho (1960) soundtrack by Bernard Herrmann. I put it with ‘Bedroom Bully’ by Shabba Ranks, and the harmonies seemed to work well together. I threw in a couple of samples of very posh, old-style English exclamations from an old French film ‘Les Vacances de Monsieur Hulot’ (which is where I got my DJ name). So, that slightly odd combination is why they are Hulo Jamdowns! Back in the SubFM days, it was also about dubstep, garage and jungle, but as that died out, I became interested in the wider possibilities of the UK sound, with artists such as Sudanim, Wen, Facta etc. The space and syncopated beats (rather than 4 to the floor style) in a lot of these tunes also happened to work well with the format I mention above.

What is your favorite film soundtrack? Favorite composer?

That’s opening a can of worms! If I had to put it down to one in particular, I’d probably choose Patrick Doyle’s ‘Henry V’ (1989, Kenneth Branagh). The orchestration is just so rich and captures so perfectly the whole spectrum of emotions involved in the drama. It’s something really close to my heart, and also to my sister. Favourite composer would have to be Hans Zimmer – powerful, big sounds for big films. I also love Alexandre Desplat (A Prophet, The Grand Hotel Budapest), Jeff Russo (who did the music to the TV series Fargo) and on the more classical side, Max Richter, who scored The Leftovers and The Blue Notebooks. The music in Won Kar-Wai films never disappoints (take Yumeji’s Theme by Shigeru Umebayashi, so beautiful) and how could I forget the Japanese composer Ryuichi Sakamoto.

Too many to mention.

Do the Jamdown mixes tell a cohesive narrative or is each one essentially a new start to the story?

Each mix is, like you say, a new story. The narrative, the ups and downs, intense moments and then times of calm, are an expression just for that ‘episode’. I hope that each mix is different in its own way, but also not totally disconnected from the Jamdown concept, where you have some reggae and dancehall in there, alongside the UK bass sounds, ambient/field recordings, dialogue, hip hop, and some unexpected tracks from Joan Baez and opera. The soundtrack music helps keep that idea of a story, which is what I love so much about it as a genre, but also as a device.

Do you have any interest in providing soundtracks/scores for films yourself?

Absolutely. As well as continuing the Jamdown series, and keeping up to date with the UK bass scene, and everything good in the world of dance music generally, I am building a collection of tunes, which I would love one day to be involved in some sort of score. Since I’m in living in Taiwan, I’ve also been building contacts of Asian pop singers – I’m writing a song for Eve Ai (艾怡良). Obviously, as you can tell from the video [hyperlinked in the last sentence], this is quite different to the music I put in the mixes, but like the Wiley/Zomby Symphonic edit I did, I’m keeping the orchestral/soundtracky element there. Should be fun!

Steven Price – In The Blind

Slake Mob – Among Us

Joan Baez – Where Are You Now, My Son?

Max Richter – On The Nature Of Daylight

The Archers: An Everyday Story Of British Country Folk – Dan & Doris By The Fireside

Jóhann Jóhannsson – A Game Of Croquet