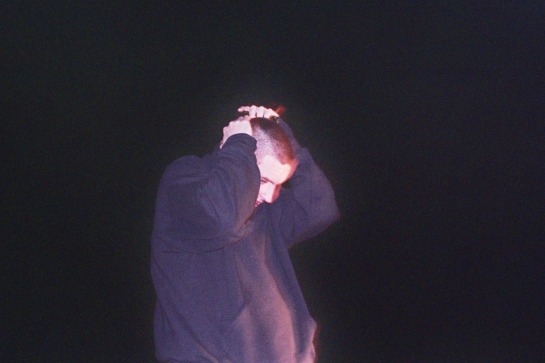 “One question I’ve been asking myself lately is what happens if our architecture pushes to be fictional, forcing our lives into fantasy.”

With his first two releases out in the past year, New York’s Eaves is a relatively new name in the constantly expanding (and blurring) world of club music, but his perspective on the form feels far more articulated than artists and critics both far older and more experienced. Last March’s Hue EP on Seattle’s Hush Hush Records functioned as a startling introduction to Eaves, a chest rattling four-tracker touching on architectural tropes and blending ambient noise (bird sounds, static, eery pads) with a myriad of different percussion arrangements. December’s Gorilla, a uniquely arranged four movement piece for Purple Tape Pedigree, both expand and expound upon his work on Hue, maintaining the spatial awareness and dystopian sonics, but involving a much wider emotional range, full of the sort of anxiety and excitement both inherent in our persons and our environments.

We spoke with Eaves via email about Gorilla, fictional architectures, and having an appreciation for EDM as a musical idea. His Astral Plane mix features a series of vaulting rises and dips in energy, cutting across over 50 tracks from a who’s who of boundary pushing producers and peppered with bizarre vocals from an EDM pack and Call of Duty respectively. Referring to his short attention span, Eaves rejects that he does not see his own art/music/culture consumption as being “a calculated, contemplative experience,” instead seeing the process in terms of “osmosis” or “indigestion” and his Astral Plane mix, along with Gorilla‘s skirting, almost spastic form, certainly reflects (enforces?) that point of view, an almost uncontrollable tumble through the canon with plenty of outside noise and peripheral interference. Check out our full talk with Eaves after the jump as well as a full image-oriented track list and indulge in his Astral Plane mix below.

END_OF_DOCUMENT_TOKEN_TO_BE_REPLACED

It’s a stacked post-Thanksgiving weekend here in Los Angeles and it closes out on Sunday with Response, a new night at The LASH that’s bringing out Seattle’s Kid  Smpl and New York’s Eaves for the first gig. We’ve been huge fans of Smpl for a while and the Hush Hush/Symbols rep contributed our latest Astral Plane mix, a visceral journey through noise-y club tropes, Future and plenty of originals from his latest Response/Ascend EP (out now on Symbols). The bill is filled out by Princee and DJ Vrizon Wirlss and is going down at The LASH, home of our monthly Clubfriends night. It’s $10, but we’ve got a pair of tickets to give away to one lucky winner. All you have to do is enter your favorite track from Response/Ascend and you’re entered. RSVP for Response here and hope to see you all out there.