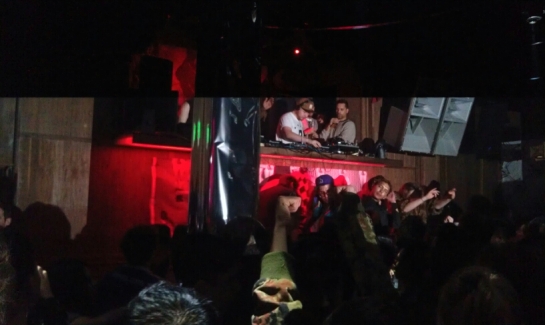 On December 14, 2012, I met a Club Called Rhonda and she took me to dance music heaven.

Going to a college in America where social life for many revolves around school sanctioned parties with shitty beer for those of age, security admitting only the privileged and admitted, and somebody playing David Guetta type drivel off iTunes, I have to say that I have been to a lot of shitty parties.  I don’t mean shitty parties in the typical sense, but shitty as in “mannnnnn I wish I hadn’t just seen that spectacle because I’m a lot less optimistic about the future of humanity now 😥 “.  People go to those things with the vague hope of haphazardly grinding up on someone of the opposite sex and in a chaotic hormonal swarm, somehow translating that chance interaction into some awkward sex.  It really sucks.

That’s all the ranting I will do about the social dynamics of some 18-22 year olds that I’m sure you don’t give a fuck about; I just wanted to give Rhonda a proper foil.

Let me tell you some more about her.  The party, a monthly affair in Los Angeles, originated as the extension of a drag queen into something greater than a ballroom persona, and has since become “L.A.’s undisputed mecca for HOUSE, DISCO, AND POLYSEXUAL HARD PARTYING” (from Rhonda’s website).  Jerome LOL, a bastion of tasteful LA hipsterdom, cited it as his favorite party, and the event had that “buzzy” feeling in the runup.  Unfortunately, the folks at Los Globos weren’t too pleased with my youthful vigor (like any good bacchanal, it is a 21+ event), and although Rhonda herself signaled me in, I was forced to slip in the side door and rush into the mass of hard partiers. I pushed through the mass of hard partiers grabbing their salvation smokes outside and rushed upstairs to catch Samo’s set.

Goddamn Samo Sound Boy is a good DJ.  His move in 2012 (other than the run of stellar Body High releases) was to ditch Serato in favor of a big ol’ book of CDs.  From the man himself, the benefit of this seemingly nostalgic play is that it forces the song selectah to actually know his songs.  While many raised on laptop DJing (ya boy included) balk at the prospect of not having a 10,000 song library and the chance of a mix that isn’t beatmatched like an automaton is on the 1s and 2s; I have to admit that I haven’t hit the sync button on my decks since the 14th of December.

It is so easy for a contemporary DJ to play to the big drops and hyped tracks without any patience for building the groove.  Building a groove is not about dropping something that makes people loose their shit every minute and a half.  Building a groove is about understanding that dance music, the good stuff at least, has an aesthetic, a vibe that is ephemeral and impossible to understand unless you really listen.  What I’ve learned from watching Samo play (both at his opening set for Disclosure on Haloween and this Rhonda gig) is that the DJ has the power to highlight this vibe for the listener.  To me, mixing is as much an art of providing context to the songs being played as it is a matter of playing good songs.  A key point of praise for Body High is how it carries a cohesive look, sound, and feel, a respect for dance music tradition with a forward thinking rather than nostalgic twist.  This cohesiveness was the most impressive thing about the label boss’s set.  The stuff hit hard as hell; my head was like a pendulum the whole time, but I also got lost in the music.  It took me about a minute to realize that he was playing one of my favorite songs (Jacque Greene’s Prisim) because it was so tightly woven with what came before.  As I looked around, I saw people moving, searching for the groove the same way I was.  Preconceived notions of what people wanted to hear played no part in the affair; watching Samo weave back and forth up in the booth made you trust that what he had to show us was worth waiting for with open ears.  At times I would look up and catch the eyes of those around me and we would share a look, a raised eyebrow that would say “whoa, did you feel that”.  Those interactions meant more to me than anything physical I ever had at one of those shitty college dance parties.

I’m sorry Total Freedom and Delroy Edwards, but I missed your sets.  Call me a bad music journalist, but I had to get my salvation smokes in and got caught outside.  I’ll come see you both some time and enjoy the hell out of it I’m sure.

Ahhhhh. Bashmore. Everybody loves this dude. He was Rhonda’s choice to headline her biggest party of the year, the finale, and a very nice bloke that I met during his set assures me that his stateside acclaim pales in comparison to the clout he holds across the pond.  I heard Au Seve dropped the week prior by this dude named Leo, an electrical engineer who moonlights as a great house DJ (there are a shocking amount of Leos out there, and I love them), and it damn near knocked me over; I got turnt UP to that track.  Out of laziness disguised as purpose, I didn’t listen to any Bashmore mixes prior to Rhonda.  I wanted to see what he was about in the most “house music” context possible, which is not the library while I’m doing a math problem set.  Here’s what I was expecting: every 64 or so bars I was going to get a drop that was as enormous as the one on Battle For Middle You from those UK producers that I idolize and I wouldn’t hear those tracks again for another few months.  Nope.  Instead I heard the best DJ set of my young life.

Remember when I was talking about patience and building the groove?  Bashmore’s hour and change (could’ve been two idk really perception of time was pretty wack) was an exercise in this.  His set was peppered with big-ole moments, but most of the opening was a carefully deployment of minimal, groovy house and club music.  It was far from predictable, but he sat on songs for seemingly huge stretches of time.  He brought this acid track back in like 3 different times, and each time it had a drastically different drum pattern behind the same wicked bassline.  The groove he created moved and flowed; it would break and simmer and then suddenly come to a boil in an unexpected but wonderful direction.  He dabbled in straight up house, there was some techno, of course a few cuts that evoked the ballroom.  It was all good, but I felt like I was waiting for something.  Then all of a sudden I heard the telltale opening to Battle For Middle You and it dawned on me what was going on.  As soon as the swinging climax of said track filled up the main room of Los Globos like a flood, I had this little epiphany and realized what the man with the ginger beard and classy Broadwalk shirt was doing up there in the booth.  He had been building and permuting, setting up a pedestal for the moments in the night that really mattered: those poignant pieces of his own productions that are engineered to move and shake a dancefloor full of bodies.  And I was shook.  I put my arm around the aforementioned nice bloke and just felt fucking awesome.  I danced like a fool, I ran into the people around me, but it didn’t matter.  Before I knew it, he had led me through a seemingly endlessly prolonged second drop of Au Seve and closed with a mind-bending piece of future music.  It was late, I was tired, but I didn’t feel bad about leaving.  I was sated.

Thinking back on Rhonda, I feel tremendously inspired.  I felt like that club was good for the people who danced with her.  If their experiences were vaguely similar to mine, they got to search for a groove and find out a little about themselves in the process.  Comfort in that space did not come from fulfilled expectations, it came from knowing that it was ok to enter that room not knowing what to expect and being taken on a proper journey on the tide of a well constructed groove.  As you will see tomorrow, I’ve been making a lot of 4 on the floor music since I met Rhonda because it seems like a way for me to fight against the soul-less, shameful excuses for debauchery that my peers suffer through.  “Mainstream EDM” with its haughty DJs and impersonal electro leads can go curl up and die.  If someone goes to the club for the express purpose of hearing “Feel So Close to You Right Now” or whatever that shit is called, he or she is wasting their damn time. Music and dancing is a way for people to actually connect with each other, feel something other than overwhelming lights and the same overwhelming midrange they heard before.  Let’s hope Rhonda and her peers lead us into the future.