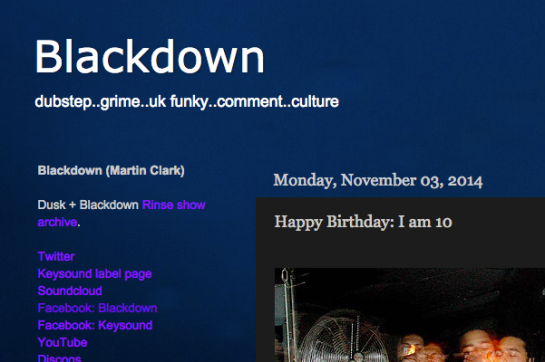 For years, Martin Clark aka Blackdown Soundboy’s blogspot address has functioned as both a central point for some of the most current, self-defining journalism in dance music and a treasure trove of garage, grime, dubstep (and beyond) history, including mixes, interviews and retrospectives on the scene’s seminal nights, conflicts and successes. For me, the site has offered a pin prick camera view into the demise of late 1990s garage, the rise of dubstep and the proliferation of grime. It offered a gateway into the spread, mutation and peculiarities of the music I now hold close to my heart and which, at the time, I was unable to connect with due to age, geography and a shit modem connection. Recurring characters like Skream, Kode9 and DJ Target have become familiar, despite the fact that the majority of the articles were written five-plus years ago. Today marks the 10th anniversary of the site, which will hopefully continue to function as an unofficial register of 2000s ‘nuum culture for years to come, and Clark has uploaded an absolute classic of a mix from FWD>> (@ Plastic People) featuring Mala b2b Loefah and the inimitable SFT Pokes on mic duties.

Having never been to Plastic People, attended a FWD>> night, or step foot in East London, it’s difficult to gage exactly what Clark means when he refers to this set as the “best live dubstep set I’ve ever heard recorded,” but despite the inherent cognitive dissonance of listening to a set so firmly set in a specific temporal realm, its eminence is as easily recognizable as any other “scene defining” mix, song, album or live performance. Clark included his own version of live blogging to round out the 10th anniversary celebration, offering up memories, commentary and context to Mala & Loefah’s selections. If you’re not familiar with Clark, Blackdown Soundboy or the label, Keysound Recordings, he runs in tandem with Dusk, cut a few hours from your day and browse back through the annals of the Blackdown Soundboy blogspot.