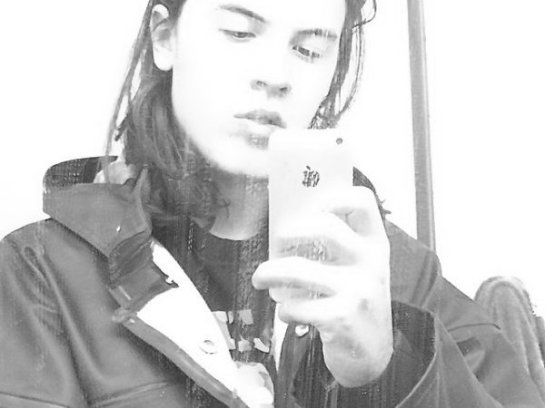 Update: We spoke with Alex over email and discussed his introduction to grime and dancehall, his Pacific Northwest roots and the disappointment in seeing bad DJs get bookings in New York. Check it out below the fold.

Alex Compton exists in a world where Lady Saw, Hard Creation and Slowdive meet, a deeply emotive tangle of floating squares, riddims, gabber kicks, rainstorm field recordings and video game soundtracks meet. Currently residing in New York, but hailing from the West Coast, Compton has creeped into our consciousness over the past few years on the back of a series of excelling edits, ranging from a weighty take on Nelly Furtado’s “Say It Right (championed by Endgame over the past few months) to a tearjerking take on a Lady Saw freestyle. On the original front, a sino-grime-inspired collaboration with Fallow has been making waves (and showed up in the Manchester producer’s Astral Plane mix) and a few ambient-leaning bits have been popping up in left-leaning sets here and there.

For the most part though, Compton is something of an unknown entity, avoiding the well worn imitator hat while delving out a sonic space for himself somewhere alongside the aforementioned touchstones. His Astral Plane mix sheds some light on possible contemporaries, from TCF and Rabit to Young Thug and Mica Levi, but the most common thread is an overriding notion of feeling and sentiment. Avoiding the sense of dread and paranoia that so often permeates experimental electronic forms,  Compton’s music seems to touch on loss, love and hope without any preamble and while it is largely instrumental music it retains a tenderness and humanity. We’re in the midst of talking with Compton about the mix and his music so look out for an extended interview in the next week or so. In the meantime, dive into the mix and check out the track list after the jump.

Hi Alex, thank you so much for recording a mix for us. Been a pleasure to listen to over the past few weeks. Where did you record it and what mindset were you in?

Thank you! If I’m being honest, I recorded it mostly in bed or at school between classes, through traktor using my laptop keyboard because I don’t have CDJs or a controller at the moment.

You live in New York, correct? Is that where you’re from originally?

I live in NY but I’m from Portland OR originally—I moved here for school.

What does a day in the life look like for you? Where do you find time to make music?

Up until recently I’ve been pretty busy with school which made it hard to make music, but my summer just started so I’ve been able to finish some tracks/other projects which feels really nice actually. Apart from that though my days are pretty low-key… I tend not to go out all that much cuz it’s expensive and sometimes not worth it especially in NY.

Unlike many artists who get into producing in order to be successful (in the career sense) as a DJ, you’ve pretty clearly come about as a producer first-and-foremost.

When I started out making music it was definitely to make tracks; I don’t think deejaying was really even on my mind at that point. I sort of taught myself how to deejay maybe a year and a half ago because Endgame hit me up to do his Precious Metals show on NTS—I mean before that I’d played around on this free program I got from the app store, but that’s what forced me to figure it out a bit more. I really like deejaying though and would love to play more shows! Sometimes I’ll go out with friends or whatever and we’ll end up at some place where the DJ is so bad that it makes me cringe at the thought of being called a DJ too. It’s actually really frustrating: there are way too many bad DJs—I probably shouldn’t name names—getting paid gigs (because they know promoters/are promoters themselves) at the expense of the actually really good DJs out there getting none

There are amount of influences in your music, from traditional Japanese melodies [AC—I’m not sure how much I use Japanese melodies apart from one song :p] to digital dancehall, heart wrenching R&B and hardcore techno. Do these components reflect your everyday listening habits?

Yeah, the music I make is definitely informed by stuff I listen to on a day-to-day basis, even more than I realize I’m sure. I’m hesitant really to make anything derivative or appropriative—the world really doesn’t need another white dude making dancehall—and I’m constantly hoping I’m successful in that.

In a loose sense, how does your day-to-day routine, responsibilities and relationships filter into your music?

I’m always sending little drafts of stuff I’m working on to my close friends or my partner, which is really helpful for me.

You have a song called “Rain System” and have also remixed Mavado’s “It’s Raining Again”. I get a pretty distinct environmental affect from your music. Made up of really rich, colorful textures and sparse, but totemic percussion. What physical context do you see your music existing in?

I’m from the Northwest USA which is almost constantly raining in the winter, and the environment there has definitely had an impact on almost everything I do. I love the sound of rain and put recordings of it in a lot of my tracks… I tend to get really bored, even anxious, of total silence in the background of a track, especially when it’s just drums and no melody—it’s almost too clean and untextured. Silence like that can work in a club setting really well when there’s already a lot of background noise, but I think things always sound better with some sort of noise underneath it all. I also love the little digital/sonic artifacts in not so properly sampled drum sounds, or the hiss in overblown 808s, for the same reason (see: Dillinja in the studio).

When did you first come into contact with grime and dancehall? The two obviously play a huge roll in your music although you approach them from a fairly untraditional angle.

I first got into grime maybe during the 9th grade after I stumbled upon Plastician’s tune ‘Japan’ on youtube and spent the rest of the night searching through the related videos. Hmm, I think the first dancehall record I can remember hearing was Mr. Vegas’ ‘Nike Air’, on the Playground Riddim, probably a year or so later. I still listen to that tune a lot, it’s really incredible.

You often put a lot of emphasis and weight on short vocal refrains. I’m thinking specifically about your remix of Gronos1’s “Faithful”. It feels sort of like a distended grime production, but the short vocals bits saying “I don’t want it” and something that sounds like “I can feel it dying” are often all i can focus on. As a producer approaching a range of genres and vocal sources, American, British, Jamaican, etc., what is it in a vocal that makes you want to sample it or draw inspiration from it?

It can really be anything really, like a phrase that sounds really compelling on its own, or even just a snippet of a word that just sounds good in and of itself. Lately I’ve been starting to sample little bits of the ad libs from song intros; I think they’re often kind of ignored but I’ve always been sort of drawn to them. For that Gronos1 remix though, a lot of those samples were in the original—they’re from Rihanna’s ‘Unfaithful’, which is kind of a cheesy song but has always been sort of a guilty pleasure of mine. I added the “I can see him dying” bit because it was always the part I remembered from Rih’s version. (I think there’s another sample in there from an old disco tune—‘Touch & Go’—that was also sampled in Foul Play’s ‘Dubbing You’.)

What medium that you haven’t worked in yet would you like to/plan on working in?

Sound synthesis with a real synth, text, video. I also want to start a night or something similar at some point with my friends, if that counts.

Where do you generate the most trash, either physically or digitally?

On my computer desktop