Captain Murphy is now a household name (or maybe a messy apartment name if the rest of the fan-base is anything like the author). We still have no idea who Captain Murphy is. I trust Flying Lotus when he says it’s just a young rapper with dope rhymes who is camera shy. Maybe there will be some clues on Duality, which is set to drop this Thursday the 15th.

His latest collaboration with Azizi Gibson and Jeremiah Jae meets or exceeds the level of dopeness we expect from Murphy. It’s got the haphazard vocal interjections under the main vocal common in Azizi Gbson x Jeremiah Jae collaborations, together with the intense bouts of pitch shifting of Captain Murphy that has come to define his vocal presence. On the upcoming Duality mixtape It will be nice to hear these smooth sailing hip hop tunes right next to heavy trap beats of the likes of Shake Weight.

This beat has Flying Lotus written all over it from the drum compression to the granular ambience in the background. It sounds like one of the ones he’s had lying around for a few years and finally found an artist worthy of it. The beat carries the track but the vocals really just prove that these guys are great lyricists. Listen for a final fantasy reference, a lord of the rings reference, and what sounds like a Talib Kweli diss(?).

Flying Lotus has spoken recently about receiving inspiration from the hip hop sphere and an appetite to work with MC’s. It’s probably not a coincidence that FlyLo’s Brainfeeder label has bulked up on MCs over the past year, signing Jeremiah Jae, Azizi Gibson and The Underachievers. Over the past few years FlyLo has produced for Blu, Killer Mike, Hodgy Beats and most recently the enigmatic Captain Murphy character. You might remember that an incantation of the “Emperors New Groove” beat actually appeared on Hodgy’s latest EP under the title “Lately”. For some, his production work is difficult to ingest, which was most apparent on Blu’s NoYork!. Over the past few months though, FlyLo has cut away much of the excess, allowing the MC to shine over his production like never before. Think about how Earl and Murphy flow seamlessly in the veins of “Between Friends”. “Emperors New Groove” sees Gibson taking on Dom Kennedy-esque flow, waxing poetic about fame and the simple things in life, namely weed and women. Stream the track below and grab a download here. 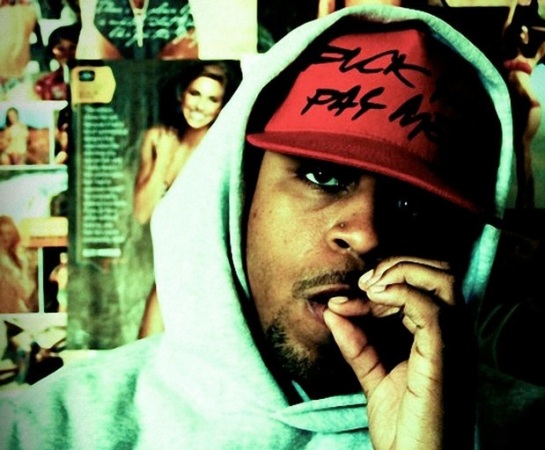 What happens when perennially slept on globetrotting MC Azizi Gibson and equally slept on Dallas producer LDFD get together on a track? “The Jeffrey”. “Weird” rap is quite in vogue at the moment, especially in the City of Angels, what with everyone speculating on who Captain Murphy is, and Kendrick Lamar spitting like an alien on his first label single. The LA transplant Gibson might just be doing it better than anyone else though. “The Jeffrey” is an ode to everyone’s favorite narcotics potpourri, with Gibson chanting “I wish I could just say we smoke some marijuana”. LDFD comes through with a dense, but deceptively funky backing, like a West Coast version of Spaceghostpurrp. Stream “The Jeffrey” below.

2012 has been a good year for Brainfeeder. Flying Lotus’s label and purveyor of everything good and holy have only released two traditional full lengths, Ryat’s and Lapalux’s (both excellent by the way), but their longest strides have come in the hip hop arena. Now if you follow us, you’re probably familiar with the label’s stable of MC’s, namely the Maryland-bred Azizi Gibson and Chicago’s Jeremiah Jae. The two have been making some of the most unfiltered, dynamic hip hop this year, which is quite a statement considering Black Hippy and Danny Brown’s output alone. Luckily for us, the two have joined together for a concept tape of sorts. Ignorant Prayers is an ode to all those who pray for the important things in life i.e. a lot of fellatio. Money too. If you’re looking for grimy, unadulterated rhymes over the wonky beats we’ve come to love from Jae and the Brainfeeder clique in general, do not sleep on this tape. It’s shocking without striving for shock value and has some of the gulliest production this side of FlyLo himself. Grab the full tape below and grab the instrumentals right here.

Brainfeeder is best known for its stable of beatsmiths, but FlyLo has found a few dudes who can spit equally weird and wavy bars. Amongst the MCs on the LA label is globetrotting nomad Azizi Gibson, a charismatic, smart dude trying to bridge the gap between good music and popular music. A former resident of Bangkok and Maryland, among other places, Z now resides in the city of angels, where he has been preparing a slew of free releases in preparation for his debut LP, due at some point in the upcoming year. Among other things, the rapper has a collaborative effort with fellow Brainfeeder artist Lapalux on the way soon that should blow quite a few doors down.  In the mean time, here is the video for “Booshie Champagne”, (a track off Z’s Phuck Dlx mixtape, which you can grab for free here), filmed on a whim over a typical weekend of getting properly turn’t. The song itself oozes carefree confidence and fun and begs to get stuck in your head on a beautiful sunny day.