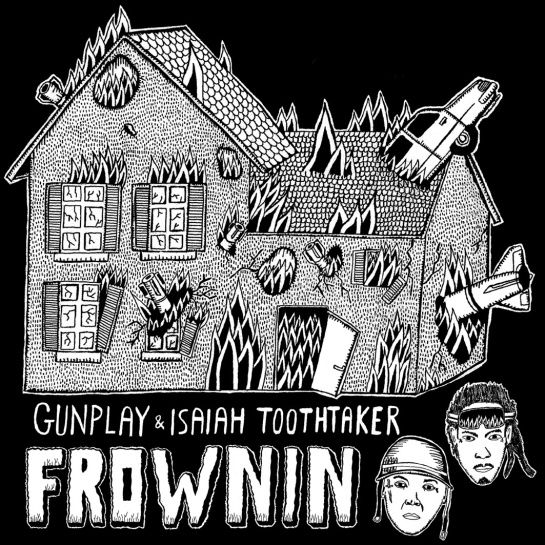 A few months ago, we featured an interesting Blue Sky Black Death remix of a to-be-released song by Gunplay and Isaiah Toothtaker called “Frownin'”. The combination of Miami’s Gunplay and Arizona’s Toothtaker seemed left field at first, but both MC’s flow together impressively and the song is a cauldron of reckless abandon, vivid street realism and cutthroat punchlines. Yesterday, a full Frownin’ EP (mixtape?) was released featuring both the original measure and a bevy of remixes from producers as varied as Low End Theory regular Free The Robots and mashup bloggers The Hood Internet. It’s a mixed bag quality-wise, but their are quite a few interesting takes on the originals, the most engrossing coming from Robert Vaughn aka PrisonGarde’s (formerly retired?) Sixtoo alias. This isn’t a tape you’re going to want to listen to front to back, but the tape takes an interesting approach and the artwork is brilliant. Stream and download below.